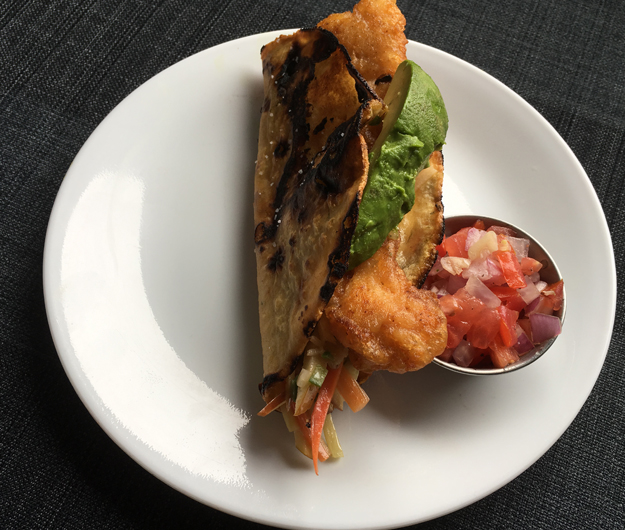 I was in the mood for some fish tacos, which was perfect because Cinco de Mayo was just around the corner! This dish, I originally assumed, started it’s life as tex-mex. In actuality it’s originally from Baja-California, Mexico and was originally called Tacos de Pescad, or Codnoscenti. It was basically a traditional taco, with battered fish in place of the pork/beef. From what I can tell, since then it has been given an English name and adopted by pub and resto bar menus across America and Canada. It’s my assumption that it’s northern migration was what lead it to evolve into what we know today here north of the mexican border. There is something about the mix of crispy, savoury, and sweet, with a Mexican twist, that’s just unparalleled.

Apple Slaw, Rum Battered Haddock, and Homemade Corn Taco shells were the main things I wanted to experiment with. As stated above, I feel this is known more as pub fair than authentic Mexican cuisine, so I wasn’t too worried about ingredients usaly found in Mexico. However, since there is something wrong with my brain, I also felt that home-making the corn tortilla and the mayo for the slaw was non-negotiable. This is a long recipe, but nothing is overly complicated about it. I urge any new cooks to try making it. Most of it can be made in advance, which means you can make this over a day or two, and not have to try so many new things at once.

I don’t know how other food blogs manage to have long stories before they get to their recipes, so let’s get right into the guts of this.

First, let’s make the Tortilla that we will make into a Taco shell

Next, the Pico de Gallo

Let’s not forget the Apple Slaw

Finally. The last Mise En Place you will need, the Crispy Fish. Everything else could be done the day before, but this is the best when it done right before eating.

And the final assembly!

*sources http://www.sunset.com/food-wine/flavors-of-the-west/in-search-real-fish-taco, https://en.m.wikipedia.org/wiki/Taco (I generally don’t like wiki as a source, but it had citations)